Picked up a couple of test prints today. Not so sure about the tartan plate. Will have a think about another way of approaching the tone. The other plate is the first etching I made live at life class. I wasn’t going to print from it, but it may be just the image I’m looking for to fill a personal commission.

Click thumbs for full size images, Have a great weekend!

Back to school… Will’s Life Drawing class began again tonight at Bristol Grammar School so I get to break out the pencil crayons for another term. It always takes a while to get back in to the swing of things, working out the rusty hinges and all. Had a lot of fun spending the 2nd half of the session etching a single plate taking in four different poses. Looking forward to proofing this now I’ve had a bit more practise at the print process over summer. I’ve photoshopped out a rough test of what the prints should pull like, but you never can tell until you get your hands dirty down the studio. 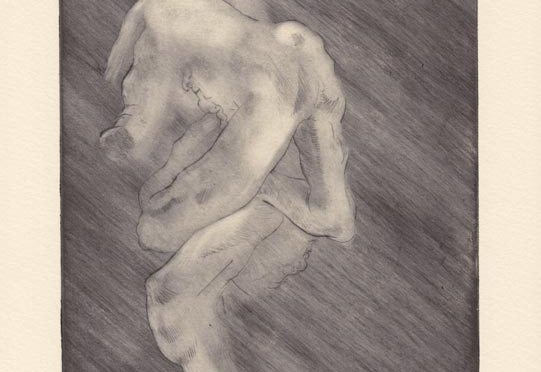 Four prints to collect today. Once again testing the two current types of ink I have at the moment. Charbonnel gives a much more subtle flavour, and the Caligo a less refined but more punchy, cartoony look. Testing will continue! Life drawing starts again tomorrow so a whole new raft of plate making will follow, which reminds me – I must prepare the 20 plates I bought :/

Its a bit frustrating fighting with tone inking up plates so I decided to have a play with using marks to make tone rather than doing it all at the print stage. I didn’t really intend to end up with this tartan type pattern, but that’s what popped out. I’ve no idea what it’ll actually look like printed, I’ve tried to quickly mock it up but the proof of the pudding will be in the pulling…

Here’s another quick animation test of my Life Drawing inkings which I haven’t posted about yet. Its all very early stages with this stuff and I don’t really know what I’m trying to achieve yet, but i’m having fun being in production mode again…

I enjoy solving difficult problems, especially in animation, so attempting to bring a sketchbook drawing to life of a lady with 3 legs certainly fitted the bill. I wanted to keep the vibe of the original image as much as possible, so tried hard not to do any extra drawing to make life easier for myself, such as adding an extra buttock for the 3rd leg. I’ve put together the following video and supporting notes to show the process that I have developed over the years for every animation that I produce. It took 2 full day to make this cycle and I’m really pleased with the outcome. A nice way to ease myself back in to the world of animation and scratch an itch with my Life Drawing I’ve been meaning to scratch for years.

The source image was created by tracing the original black pencil crayon drawing from my sketchbook with Dip Pen and Indian Ink on Watercolour paper, scanning and processing in Photoshop to give a clean high contrast line, importing to Illustrator and vectorising the image before finally pulling into Flash and stripping out everything apart from the black line ready to be split apart, made into symbols and animated.

The first thing to do is to put together 4 rough keys for the cycle – two passing and two contact points and work out the timings. I picked an arbitrary 40 frame cycle to start with (10 frames per key) and put together the 2 little tests on the bottom left. Perspective is hard in cycles so the ground lines you see reflect the viewpoint of the image and is reflected in the roughs (n.b. Blue for left, Red for Right). I’ve always kept it simple with cycles (see ‘standard’), but after reading the Animators Survival Kit by Richard Williams  I wanted to see whether his approach would be suitable for this walk – he keys in a slightly different way, but is too cartoony for what I’m trying to achieve, so I stuck with my simple route. I then apply the rough keys to each of Jill’s legs, do a quick spine and head on a 1-2 up/down loop with the shoulders rolling as they would on a 2 legged walk. The last stage is to work out how to stagger the legs correctly. Rolf Harris’s sketch Jake the Peg had him walking around using the middle leg forward followed by the outside pair simoultaneously (see video below) – I didn’t want to directly copy this as I was after something a little more subtle, so the outside pair are offset a little here. Trial and error to the rescue until it felt right.

The first thing I noticed is that the cycle seemed a little long – she’s walking too slow. I removed 8 frames to test, so we’re down to 8 frames per key for a 32 frame cycle. This instantly felt like more the right sort of speed so I moved straight on to rough in-betweens for the left leg. Once that was done, I copied, pasted and re-coloured the same animation for the other legs so I wasn’t redrawing that same thing over and over again. Once I was happy this was working I in-betweened the spine and head on simple up and down cycles to match.

So, that’s the hard bit done, its like putting together a blue-print for the rest of the process. Now its clean-up, rigging and filling in the gaps. Timing is always the most important thing to nail at the start. Making sure you get the foundations right at the roughs stage is the only way to do it. You are a lot less emotionally attached to rough scribbles, so hacking them around and changing the timings / motion is a lot easier and less demoralizing than if you just spent ages making clean art work, only then to realise its not quite working properly. The first thing to do here is split the legs in to symbols for thighs, calves, ankles and toes, then match the symbols to the roughs and motion tween. At this point you have to trust your roughs. You can see where this approach breaks down if you look at the knee joints – you can see them pull apart on the ‘up-stride’, but we’ll fix that later. Last stage is to put in the entire body and head on a simple up/down cycle so you can see the whole thing without blue pencil roughs.

The inefficiencies of this approach are made apparent by the ankles on the middle and right legs here. As soon as you make the legs opaque, so you can get the layer ordering correct and place it on a coloured BG you can see the problems. I’ve already started to test fixing the left leg – you can just about see that I’m stretching the calf symbol on the up stride to keep the gaps between knee and ankles more even. The tricky bit at this stage is how to split apart and rig the body so it moves nice and naturally. The knack is to use as few symbols as possible to give nice, subtle motion to the entire body so you don’t drive yourself mad with a symbol for each line. At this point you need to start using ease-ins and ease-outs on all the body symbols to smooth it all out and its very easy to get over complicated. I did play with animating her boob jiggling slightly, but decided not to use it in the end as I didn’t want it to be too distracting. Its a weird enough thing as it is and very easy to try too hard. Looking at it again now I kinda like it, but you can spend forever tweaking things and that way madness lies…

We’re just about there. Its now about refining the body symbol animation and getting the layer orders correct before filling in the gaps on the legs and tying up the loose ends. Here’s a close up of the hips as they are in the final spot:

This is a perfect example that you are almost finished and should stop fiddling. I’ve tried to finesse the spine cycle to fit with the hips a little better, but ended up killing the feeling of the up and down motion. If you look at the base of the spine it looks almost static. If I was to animate this across the screen, your eye would read it as floating. Not cool. So back to the original version in Step 5 we go.

This is the finished cycle. You can tweak things until the cows come home, but the real skill lies in knowing when to stop and move on, as evidenced in Step 6.

The last stage is to test that the cycle works as it would be seen in production. Its all well and good working as a static test, but the real proof of the pudding lies in whether it works moving along a path. Its more difficult to get walking across the screen right than you’d think. Perspective makes it even harder. Getting the feet absolutely planted is the goal and it just about works here. Again I could have played with it for ages to get it perfect as she imperceptibly speeds up towards the end and the foot very slightly slides at the start. But that’ll do for me :D

I hope that’s a little window into my workflow – If you have any questions or comments please fire away!

I’ve been kicking round the idea of animating my life drawing for some time. This week I decided to bite the bullet and give it a try. The step that had been missing was inking up my sketchbook work. Once I had a properly cleaned up image, I could scan and process it in Photoshop, vectorise it in Illustrator then pull it into Flash to be chopped up, rigged and animated (I’ll then be using After Effects to cut a “how-to” video in the following blog post). This is the result:

Left to Right walk across screen

Close up of hips

Here’s the original image. I made a point of trying to stay as faithful as possible to the original by not re-drawing any of the parts to make it easier to animate – like adding a third buttock for the extra leg for instance. It took 2 full days work to complete the cycle but I’m really pleased with the way it turned out. It’s got a weird spider-like feeling to the cycle as it moves across screen. Its an odd image in the first place which wrong foots you with its extra leg (no pun intended…) and the animation supports and enhances that vibe. Good times. I built the piece in such a way to allow me cut a step-by-step walk through video which I’m working on at the moment. I’ll post this up soon. 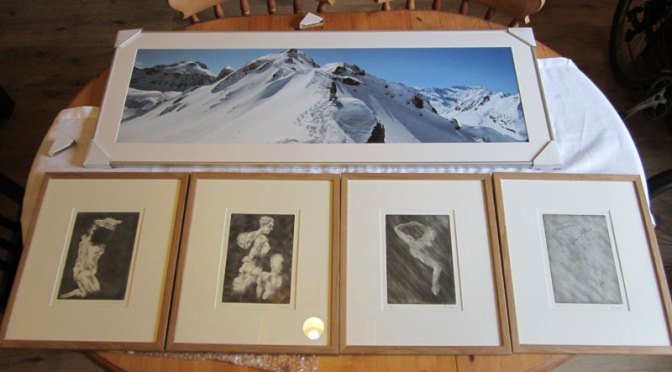 Excellent! Just took delivery of four framed etchings and one massive snowboarding photo from the lovely guys down at Niche Frames in Stokes Croft. Well chuffed with the results. Can’t wait to see more of my work replete in its Sunday best in the months to come. Its really nice to know that I’ve got the final piece of the puzzle worked out. Happy Dave’s :D

Today I send off my submission to the sixbyeight.co.uk charity auction with all proceeds going towards www.hopskipandjumpsouthwest.org.uk – What will it be? All will be revealed in November when the event is complete…

YOU could own a piece of DMCropley artwork… and not even know about it ;) 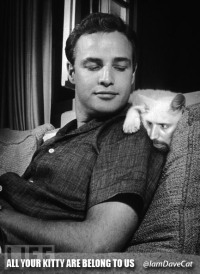