I had a spare Visaton Ws-17e driver that arrived damaged, and the company replaced. I managed to fix it and kept it as a spare… but spare woofers = potential for more B.A.S.S.

Kinda. These drivers are not meant to be subwoofers – you need big Xmax (excursion) or/and cone size for B.A.S.S. But I played around in the transmission line software and came up with an enclosure design, that looked like it might work. I had a spare channel on one of my amps and could do with another sub to even out the wack acoustics in my attic, so I lashed out a build

The graph looked good. So I started planning out the transmission line enclosure design based on the measurements. Spoiler alert: The frequency range looked proper, but the output volume (amplitude in db) was really low. So, you could hear low bass, but as soon as you turn it up, the driver reaches past its excursion limits and distorts like crazy.

As soon as I worked out the measurements, I figured this was an experiment so I’d use MDF for the first time and try out the cutting service at the local B&Q. That was all good in the hood. It was cheap, and worked. But in the end, MDF is no way near as nice to work with as plywood

I smashed it out in no time. It was a nice little palette cleanser after the crazy, emotional slog that was the hifi transmission line build. It was always meant to be a quick and dirty, so I didn’t finish the box nicely like the other ones, just hooked it up and added it to the big system.

It doesn’t really add much unfortunately. but it helps get my head round what all these bonkers numbers that I don’t fully understand actually mean in real life.

I had planned to build more speakers after this, but I’ve run out of steam at the moment. Time will tell…

How hard could it be, he thought. Google it, he said. So that’s what I did. This happened… and shaped the next 2.5 years of my nerd life.

A bit of back story. 3.5 years ago I decided to quit Facebook and lay off social media. Bloody good decision, that. With all the new time I had on my hands, I thought I’d finally buy a sub and do some musics. I couldn’t decide what to buy, so I had a brainwave – I’ll build one.

It turns out building speakers is a bit more in depth than I thought. 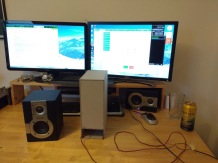 To build speakers, you need plans, all the bits, and a basic knowledge of carpentry. None of which I had. But I did have an internet. So I used it, and eventually ended up at this thread: Reed Exodus Anarchy 25Hz tapped horn. (Respect to the creators of these plans) 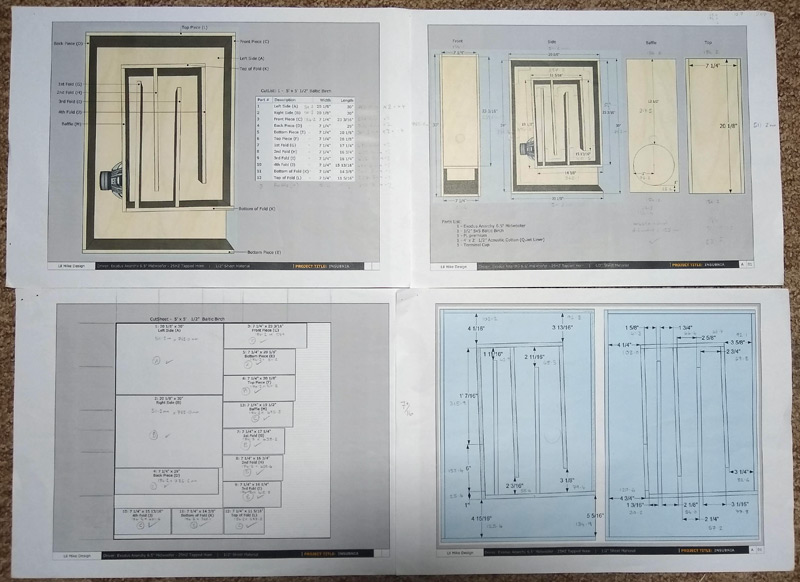 I knew that low (25hz) was good, and the plans looked pretty comprehensive – so I went for it. This is where we step back in time to a previous blog post: Building a subwoofer card prototype. I built a mini prototype. I can’t remember why, shits and giggles really, but it sort of worked and gave me enough confidence that if I could do it with card, I can do it slightly bigger, with wood.

Then I realised that I knew nothing. About anything. So I thought I’d take apart an old Cambridge Audio 2.1 sub I’d had for ages that was making some funny crackling noises. Maybe I’m good at electronics, I thought. Maybe I can fix it I thought. So I took it to bits, looked at it for a while, then put it back together to see if looking at it had fixed it. 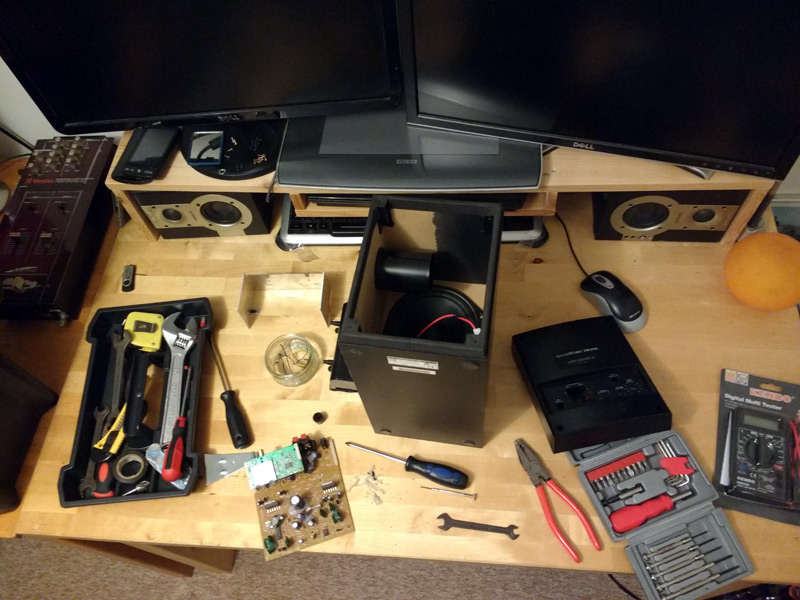 It hadn’t. But it did still work. Amazingly. Incidentally – that volt meter you see to the right of the photo above still hasn’t been taken out of the packaging and used. It appears me and electronics don’t really care for each other.

I now know this is a 4th order band pass enclosure design. Even now I only sort of know what that means. Back then I just thought it was a bit weird there was a hole (port) and a space behind the speaker. That’s a waste of space I thought. Should have made the box a bit smaller.

It turns out that one of the (many) quirks of speaker design is that the driver is matched exactly to the enclosure. It further turns out that the specific driver these enclosures are built to work with are only available from one source. In the US. And they do not ship internationally. Slow clap, me.

After much googling, I found another driver that I could just about use that is more commercially available. If you live in Germany. And speak German. Or want to spend more than the speaker itself on shipping from the US. So with a wing, a prayer, and judicious use of Google translate, eventually a small, beefy Tang Band W6-1139SIF 6-1/2″ driver landed on my doorstep.

Then I had to build a complicated folded (tapped) horn shaped box. Bloody ages that took. finally I got this thing built and realised that I need a decent amp to power it. So I borrowed a power amp.

Then I realised that sub woofers only play bass, so I need to feed it just bass. Which meant crossovers. Which meant electronics. And working out what the hell crossovers are. So I didn’t do that. I bought an active crossover that had knobs on. Loads and loads of knobs. And had to work out how to make the damn thing go.

Eventually I finished and sealed the thing – and it worked! Finally, I had phat, deep bass… after many, many months of toiling and some £s.

Well that worked, I thought. Maybe I should build more. Because more is better… 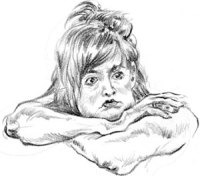